When You’re in the IN BETWEEN 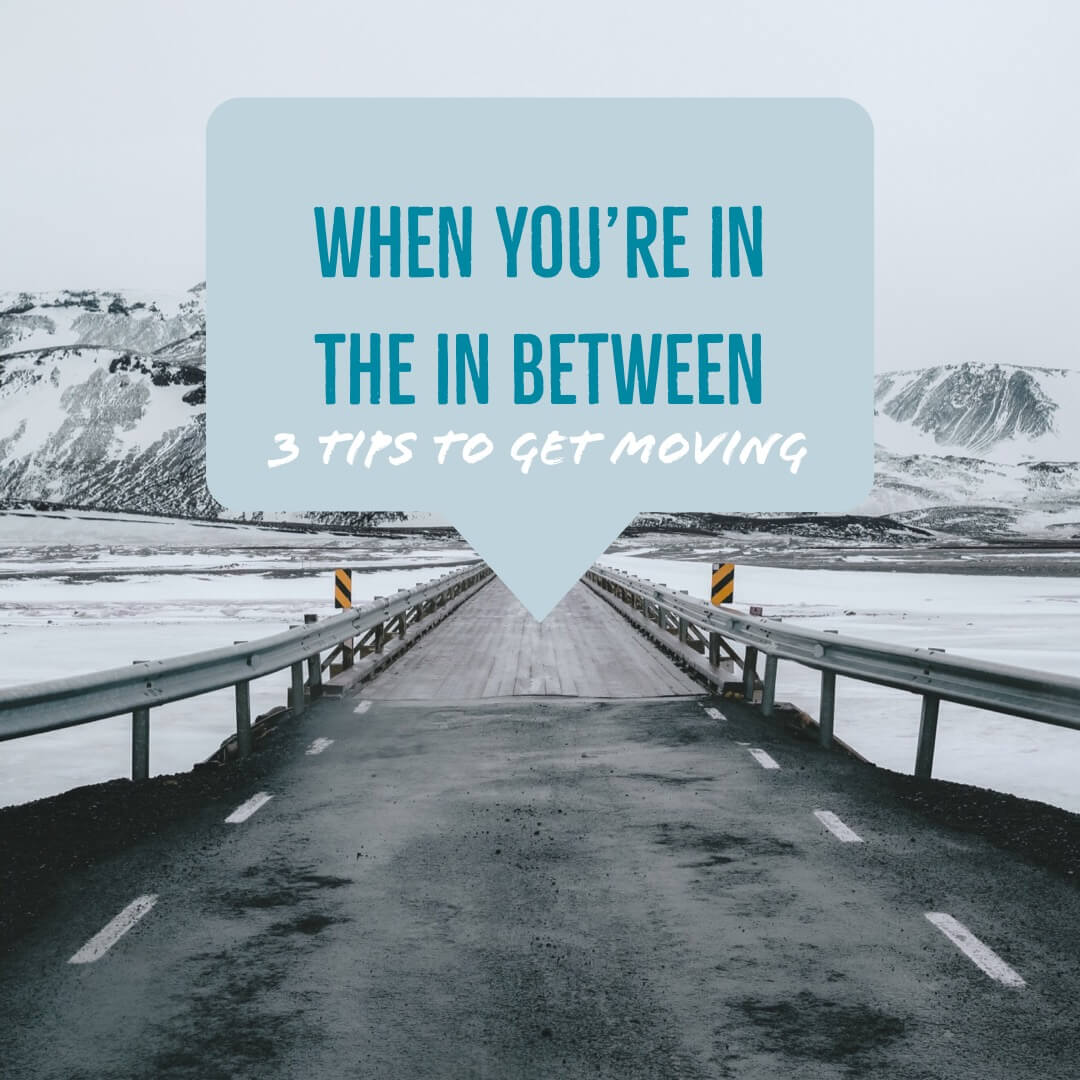 Ever been there? When you didn’t quite know what to do, when you were waiting for something to change, when you didn’t know where you fit in? These queries don’t lead to a quality of life where balance and fulfillment reside.

The IN BETWEEN challenges us because we don’t quite know what the enemy is & our brains think it’s safer to stay in I DON’T KNOW-land than forge ahead with faith. Faith requires action to really become a power. Without the action, it’s merely a pleasant idea, and a pleasant idea without execution will eventually wither into something less than an idea, something non-existent.

The IN BETWEEN can be as negligible as what to make for dinner or as life altering as selecting a marriage partner. The IN BETWEEN keeps us looking for evidence that the right answer is somewhere outside of us, and in this context we spend a lot of time seeking distraction–through entertainment, social media scrolling, and over eating, among many others things. To a tragic degree, we may seek the answers in others and their opinions. We quite literally give away power as we wait and seek validation from others, either to blame them when things go wrong or confirm that they knew what was best for us.

I believe that life isn’t fully lived in the IN BETWEEN. Waiting is no way to thrive or even to enjoy life. Save the waiting for the train station or the bus stop. That’s the only time your waiting will assure you that you’re going to get anywhere.

Below are 3 tips to get you moving and avoid the IN BETWEEN.

1) Practice Being Decisive. It does not matter that you may get it wrong, just make a decision and move forward. I like to practice this in restaurants. I’m usually the first to order and decide ahead of time that whatever I choose is going to be the best meal! In larger decisions, there is no need to spend days and weeks mulling over something. The waiting is so wasteful! Take the information you already have, make a decision, and move forward. The decision will either be something you learn from or something you win from.

2)Take Action. Say you’re new to a neighborhood, and you keep waiting on someone to approach you to get acquainted. Say you’re waiting over a year and the approach has still not taken place. You’re waiting will lead to resentment & anger. Whether it be a huge goal you’re trying to accomplish or to feel like you belong, your answer is in your action. Take action on what you want. If it’s a friend you want, reach out. If it’s to bring in more money for your household, find a way to do that. You get the idea! If you’re not taking action, you’re standing still. The IN BETWEEN feels  a whole lot like a dark, murky, still cave with no way out. You’re way out is your action.

3)Picture what’s on the other side of the IN BETWEEN. Is it more peace? Is it more connection where the smiles come easier? Perhaps it’s more insight and a new skill? Or even a brand new car? Who knows? It feels really good to me to believe that something really good is on the other side of the IN BETWEEN. I think it is for you, too. Use your creativity and imagination to visualize in great detail what that thing is. Feel it, experience it, and know with all your heart that the IN BETWEEN is temporary.

Let me clarify and say that pausing and resting are not the IN BETWEEN. Pausing is likely good for you, and resting is necessary for all of us, but the IN BETWEEN is lack of clarity and stalling on your stewardships simply because you don’t know. Saying ‘I Don’t Know’ is damaging your development. It’s withering your will.

Instead, say you’re working on finding an answer. Or, say you’ll make a decision tomorrow–and then do!

Say & believe that a conclusion is in your power & what you see on the horizon is yours to claim!